Accuracy in the Alps: A Surveying Challenge

When a Cessna fixed-wing aircraft took off over an Austrian alpine region on an early morning in August 2016, it ascended carrying two crew, a large format digital camera, a bit of uncertainty and a whole lot of risk.

The plane’s mission was part of a project to provide a precise, as-built survey of a narrow 40-kilometer (24-mile) stretch of railway in the Lower Inn Valley east of Innsbruck. Although this wasn’t an unusual task for a surveying company, the required accuracy of the project was: 2-centimeter (0.8-inch) horizontal and vertical accuracy for the entire area of interest.

“Airborne mapping surveys under 5-centimeter (2-inch) accuracy are rare in alpine environments because the mountainous terrain is treacherous and unpredictable,” said Klaus Legat, head of the photogrammetry and aerial survey department at Vermessung AVT, a surveying company based in Austria. “To achieve 2-centimeter resolution we would have to fly about 500 meters above ground within a very narrow air space, making maneuvering tricky. And for this specific railway section, we’d need to supplement the aerial imagery with ground imagery, precise control points and software that could integrate all the data into an accurate, true-to-life map of the AOI. Neither we nor the client had ever taken on such a task before, so this would be a proof of concept test to see whether modern surveying techniques could deliver such high accuracy over a large area. It was a risky proposition.”

But it proved to be a successful gamble.

With the Alps in AVT’s backyard, mapping and surveying mountainous environments is a natural focus. In fact, AVT has become quite comfortable in the alpine regions, pushing its photogrammetric capabilities to where the company routinely provides ground-resolution accuracies of 5 centimeters or better.

The Lower Inn Valley railway project would push them further.

A double-track high-speed main line of the Austrian Federal Railways (ÖBB), the LIV railway is a core part of the Trans-European Transport Networks, a high-performance railroad that will eventually connect southern Italy with northern Europe.

AVT’s target was the 40-kilometer section between the Austrian towns of Kundl and Baumkirchen, the first segment of the LIV that opened in November 2012. Designed for speeds up to 220 km/h (124 mph), the KB dual railway crosses the Alps and is the northern connection to the Brenner Base Tunnel, a 64-kilometer-long (40-mile-long) tunnel between Austria and Italy scheduled for operation in 2026.

In 2016, ÖBB Infrastruktur AG issued a tender for a final as-built measurement of the above-ground areas of the new line, the converted sections of the existing line and any objects within 100 meters (328 feet) of the tracks themselves. In addition to the 2-centimeter vertical and horizontal accuracy requirement, ÖBB specified that access to the tracks was prohibited, so a purely terrestrial measurement technique wouldn’t be possible. There was also another complexity: the tracks were lined by up to 6-meter-high (19-feet-high) noise-prevention walls.

“Because we couldn’t access the track, we had to choose aero photogrammetry,” said Legat. “But the prevention walls and other obstacles would hide many along-track features from the plane’s nadir-looking camera. Our approach was to pair an aerial survey with mobile mapping. The aerial data would give us both the railway detail and the area outside the walls, and the mobile mapper would give us the ancillary features not visible from the plane.”

Critical to the multi-sensor approach was the ability to integrate diverse data formats into one image processing software to create orthophotos and an orthomosaic. AVT selected Trimble Inpho Suite, a set of photogrammetry modules for transforming aerial imagery into orthophoto mosaics, point clouds and other 3D datasets.

“Inpho can work with both analog and digital cameras,” Legat said. “That flexibility saves us significant data processing time. It also is quite good at triangulating and multi-ray image matching, which is the foundation for producing accurate results.” 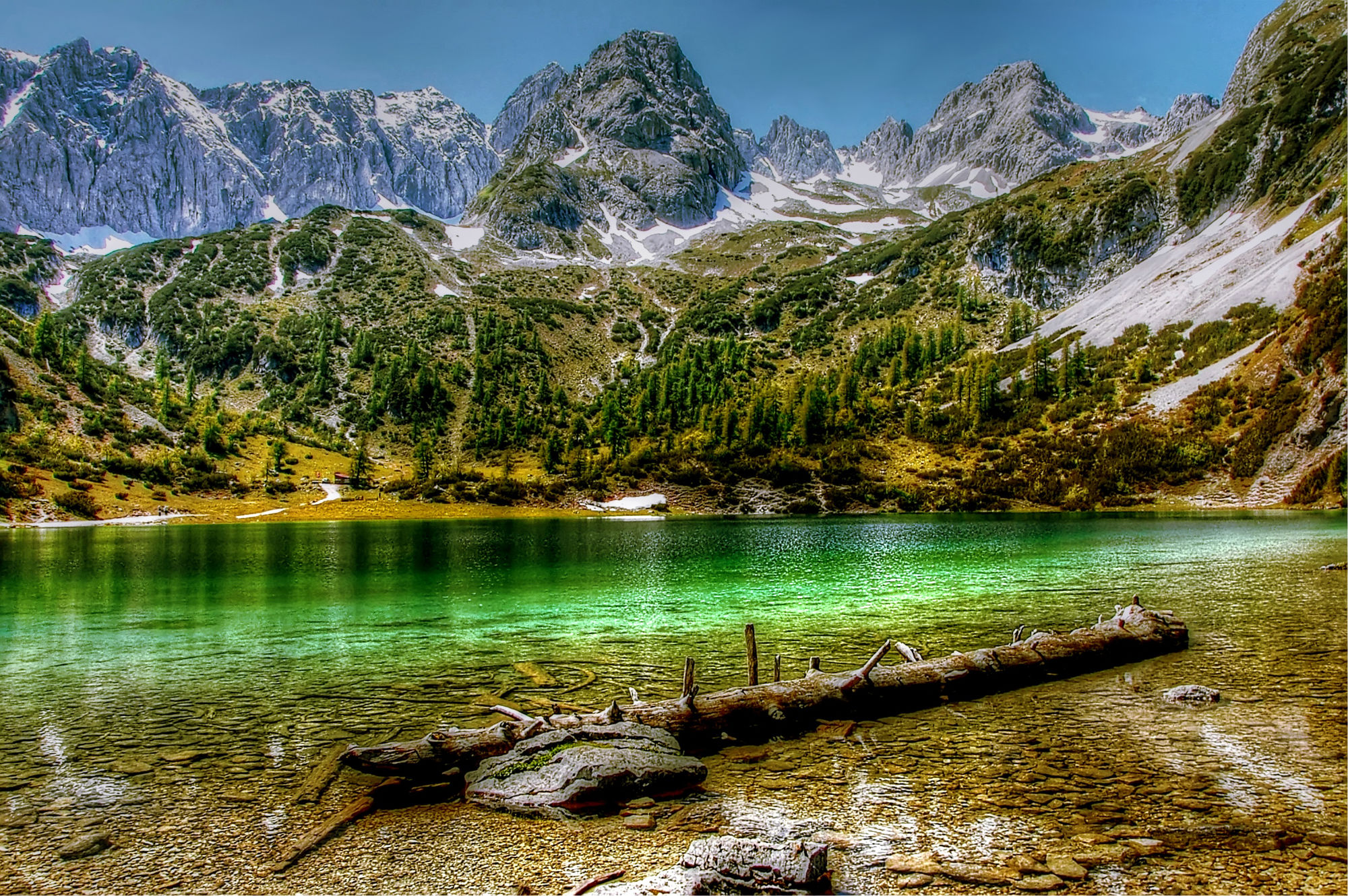 The stunning mountain landscape of the Seebensee Lake, considered one of the most beautiful lakes in the western Austrian state of Tyrol where AVT is based. Photo Credit: Kordi Vahle, Pixabay.

To achieve consistently high accuracy over such a long distance, AVT established both a precise control network and a network of ground control points. To minimize atmospheric disturbances, they created the control network through a static observation night survey. Using two permanent base stations near the center of the AOI, crews set out 30 GNSS receivers on pre-determined locations and the units simultaneously collected measurements for 12 hours. The permanent survey established a base network precise to 0.5 centimeter (0.2 inch).

For the ground control points, teams painted markers on concrete or other hard surfaces at 2-kilometer (1-mile) intervals around the 40-kilometer area and measured the center points of each with shorter, static observations of about two hours. They set five points at a time and laid out a total of 50 GCPs with a horizontal accuracy of 1 centimeter (0.4 inch).

With the control networks set, AVT could dispatch their flight crew to collect aerial imagery with a ground sample distance of 2 centimeters. Flying at an altitude of 450 meters (1,476 feet) and an average speed of 200 km/h, they covered the entire AOI in two hours. They flew 21 flight paths in an east-west direction and collected 1,300 images with their Vexcel large-format digital camera. The images had a 60 percent overlap.

Per ÖBB’s request, they also carried out a second aerial LIDAR mission to produce detailed point clouds for generating digital terrain. Reducing the altitude to 200 meters, a crew collected LIDAR data with a point density of 25 points per square meter and a side-overlap of 70 percent.

Completing the data collection was a terrestrial survey using the Trimble MX7 Mobile Imaging system. A vehicle-mounted photogrammetric system, the MX7 is equipped with six 5-megapixel cameras and Trimble Applanix GNSS and inertial geo-referencing modules. The system was mounted on the roof of a van that was placed on a truck-transport wagon which in turn was pulled by a special locomotive of the ÖBB. Maintaining an average driving speed of 50 km/h, the MX7 captured a 30MP panoramic image every 4 meters (13 feet) along each of the KB tracks and acquired features such as switching boxes, passenger benches and electrical housings not visible in the aerial photogrammetry. Along the railway there is a 600-meter-long (1,698-feet) tunnel which required the AVT team to install six LED headlights to compensate for the low-light conditions to capture features inside the tunnel. In total, the MX7 system collected 20,000 images.

“This was our first experience with the MX7,” Legat said. “It not only complimented our aerial campaign and captured the essential ground elements, but it performed surprisingly well in the tunnel.” 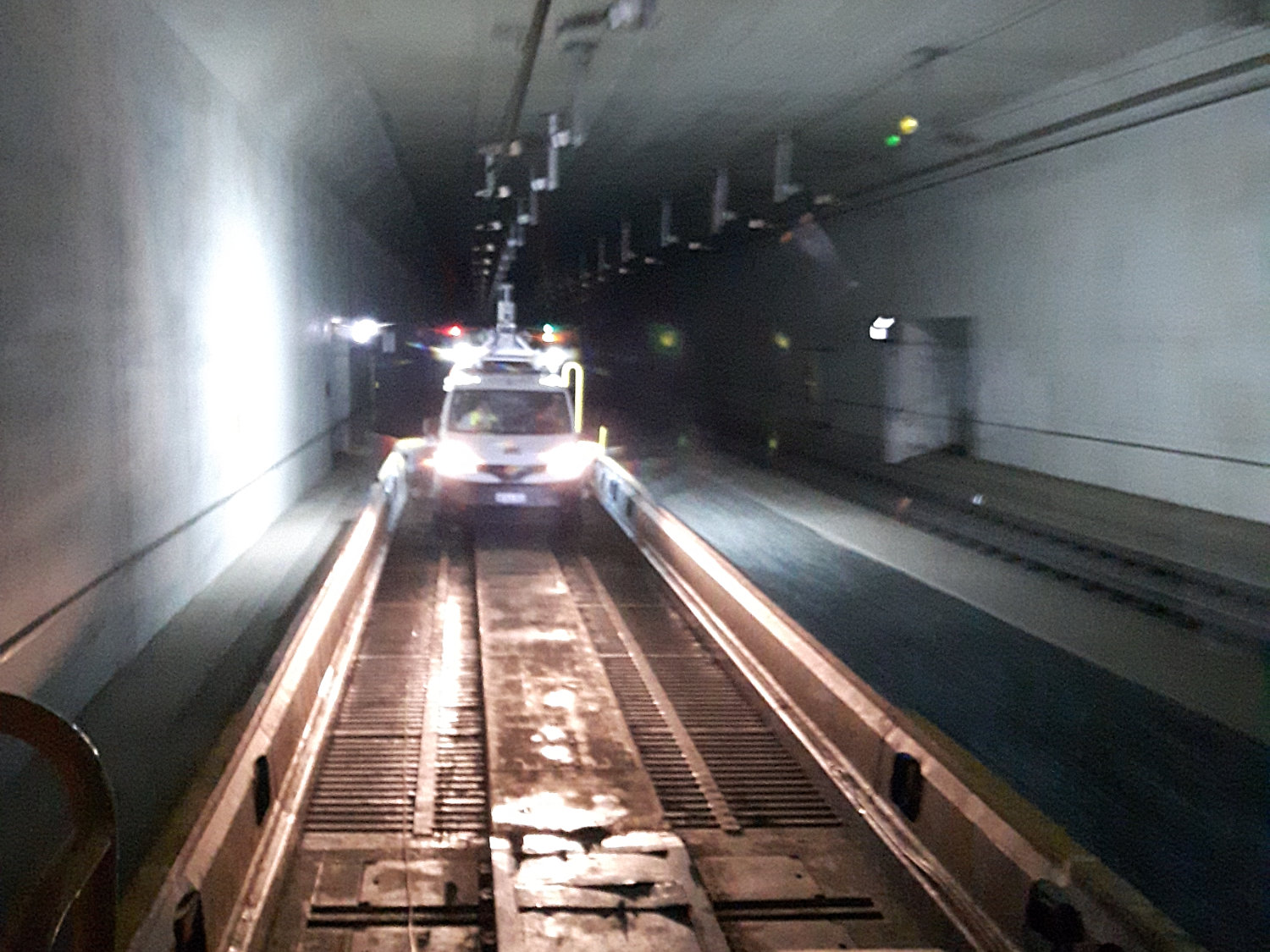 The Trimble MX7’s rapid exposure times enabled AVT to capture darkened features inside a tunnel along the Kundl-Baumkirchen track.

After downloading and processing the aerial images and aircraft trajectory data, AVT imported the data as well as the GCPs into the Match-AT georeferencing module of Inpho to automatically triangulate the images. Using an image pyramid process, the software analyzed the 1,300 images and pinpointed 15,500 common features or tie points across the images, with an average of 200 TPs per image. The precisely surveyed GCPs were measured in the images and the Match-AT module used a bundle-block adjustment process to automatically and precisely orient the imagery. The accuracy of the GCPs in the AT was around 1 centimeter in planimetry and altimetry.

“The triangulation needed to be done as precisely as possible to ensure we could achieve vertical accuracy,” Legat said. “Investing in our ground control was crucial but we also needed image processing software that could deliver the precision. As a long-term user of Inpho, we haven’t found any software that can rival Match-AT’s triangulation abilities or its intuitiveness.”

With the OrthoMaster module, the software automatically orthorectified the individual images with a ground resolution of 2 centimeters. Switching to Inpho OrthoVista, each orthophoto was then stitched together to create a 2D orthomosaic for the whole AOI.

AVT personnel used the Inpho interface to export aerial images into DAT/EM Summit Evolution software to create a 3D vector map of railway-related features. The map was customized and finalized in AutoCAD.

In parallel with the aerial mapping, a team processed and georeferenced the MX7 imagery to map objects that couldn’t be seen in the aerial images. They first determined the path of the MX7 using the GNSS/INS data recorded during the ride. They manually selected several hundred 3D points that had been determined as multi-ray TPs (aerial GCPs) within Match-AT, and used them to orient the MX7 images to ensure consistency between the aerial and mobile-mapping data. They then extracted and mapped the mobile-mapping objects and exported the results to AutoCAD to produce the finalized 3D vector map showing the layers and symbols defined by the ÖBB.

To process the aerial LIDAR data, they extracted approximately 300 horizontal patches, or surface sections, from the data and determined the mean height and standard deviation per patch. They imported this data into Match-AT as vertical-only GCPs with a 2.5 cm standard deviation. The ground points were used to process a digital terrain model and to derive height isolines, which were integrated into the 3D vector map.

Both the 2D orthomosaic and 3D vector map were delivered to the ÖBB and AVT’s results were given full approval.

“This was such a satisfying achievement,” Legat said. “The project proved that with the right tools and approach, precise photogrammetry-based maps can be produced for the difficult alpine environment. More importantly, it has raised the profile of our multi-sensor fusion technique and given us the confidence to pursue similarly challenging projects.”