Expanding 3DEP Coverage Coast-to-Coast: The Challenges and Opportunities of Improving Elevation Data in the West

Five years after the United States Geological Survey launched its 3D Elevation Program, it has delivered the first ever national baseline of consistent high-resolution elevation data currently covering 61 percent of the country. Since its launch in 2015, the program has resulted in the development of 3DEP-compliant data covering a large majority of the East Coast, South and Midwest, as well as more populated areas of the Mountain, Southwest and West Coast regions.

As the program matures and works toward its goal of delivering high-resolution elevation data covering 100 percent of the U.S. and its territories, it faces challenges and opportunities in the West, including sparse population, a smaller pool of potential funding stakeholders and unrealized use cases for the resulting elevation data.

The 3DEP initiative stemmed from the USGS-commissioned National Enhanced Elevation Assessment study, identifying the need for accurate, current and comprehensive LiDAR coverage over the conterminous U.S. states, portions of Alaska, Hawaii and U.S. territories. USGS created 3DEP to collect high-resolution 3D elevation data through the formation of collaborative partnerships and pooling of funding. By doing so, the agency saw that it could make these projects more cost effective through collective investments from a wide array of sources, and encourage data sharing between those local, state, federal and tribal organizations that need it. A follow-on 3D Nation Requirements and Benefits Study is now underway and will provide analysis and recommendations on the needs, approach and direction of the program once initial coast-to-coast coverage is realized.

Through the Broad Agency Announcement selection process, USGS solicits proposals from partnerships of state and local agencies, as well as public and private non-governmental organizations, and provides federal matching funds to help finance large-area LiDAR collections. 3DEP LiDAR data is acquired and produced in accordance with USGS specifications to ensure consistency. USGS estimates that a fully funded and implemented 3DEP program would provide more than $690 million annually in new benefits to government entities, the private sector and citizens, and has the potential to generate $13 billion per year in new benefits through applications that span the economy.

North Carolina was the first state to map its entire area with high-resolution LiDAR, both from the air and by land, using a combination of its own resources and 3DEP partnerships. The state continues to systematically update its LiDAR data to reflect changes to the built environment and terrain.

This data provides state officials valuable information to assist in disaster preparedness and planning. The state uses LiDAR data to model hazards, identify vulnerabilities and perform impact assessments on buildings, as well as natural resources. From the elevation data acquired, the state has developed accurate floodplain mapping and flood response by generating a high-resolution inventory of rivers and streams, geocoding more than 5.2 million buildings, calculating first floor elevations for the buildings, and producing 13,000 flood map panels. Leveraging the LiDAR data, the state also has been able to seamlessly understand the exact amount of water in a stream or river, and where water will flow during flood scenarios.

While these types of use cases for 3DEP data are common and offer numerous benefits in densely populated areas, like states along the coasts and in the South and Midwest, those in the West may not see the value of investing in high-resolution LiDAR because they don’t have similar needs. Those areas are sparsely populated, a significant amount of land is under federal ownership and the cost to conduct LiDAR acquisition over such vast areas is considered prohibitive.

3DEP is designed to help defray those costs, but the key is engaging all interested parties in those areas, and helping them understand the benefits of the data collected and the importance of their role in achieving 100 percent coverage.

One project in Idaho is an example of how groups joined forces to collect high-resolution LiDAR data in remote areas. Nez Perce County, the Nez Perce Tribe and the Idaho Office of Emergency Management were awarded 3DEP funding for a multi-hazard risk assessment and ecosystem restoration project covering 2,355 square miles of the state. Other agencies quickly realized the benefits of participating in the project, which grew across state lines to include cities and counties in Washington state. Ultimately the project spanned 2,662 square miles in seven counties across Idaho and Washington for QL1 and QL2 data.

The information gathered during the project has offered both short-term and long-term benefits across a broad spectrum of disciplines, and encompasses project planning, development, implementation, management, and education outreach. Among the uses have been construction engineering; transportation planning, design and budgeting; utility management; mapping impervious surfaces; wildlife habitat monitoring; stormwater, erosion and sediment control planning and design; analysis of vegetative cover and timber stand metrics; timber harvest planning, and assessing and managing risks of flood, fire and landslide. 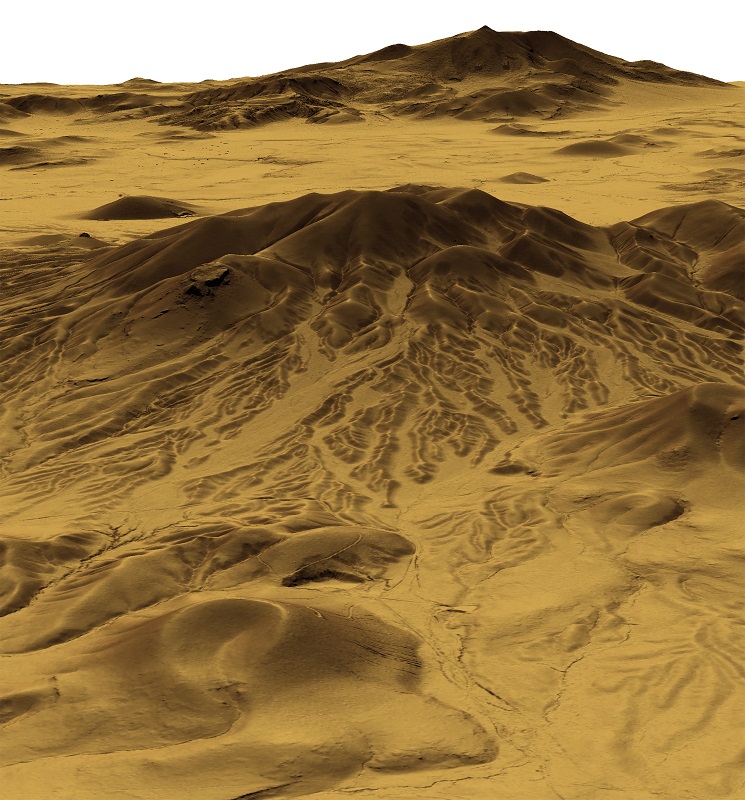 Sitgreaves Mountain in the foreground; Kendall Peak in the Background. View looking Northeast.

Wildfire, Landslide and Earthquake Threats Underscore Need for 3DEP in the West

While the western states may not have to worry about flooding related to hurricanes, elevation data from the 3DEP program is useful in addressing forestry and land management, as well as natural threats such as wildfires, landslides and earthquakes.

The analysis of fire hazards across 760 million acres of the western U.S. showed that 526 communities faced a high risk of wildfire based on factors like topography, vegetation and precipitation. Funding from the Disaster Relief Requirements Act of 2018 was instrumental to the acquisition of high resolution 3DEP elevation data covering over 20,000 square miles of western lands. This 3DEP data is providing even greater insights on how to reduce risk, respond to and recover from such events, and plan for a more resilient future.

While landslides impact all 50 states — causing up to 50 deaths and $1 billion in damages annually — areas in the West, like the Rocky Mountains and Pacific Coastal Ranges, have some of the most severe problems. Likewise, these areas, including Idaho, Wyoming, Nevada and Utah, face some of the highest likelihood of hazards from earthquakes. These natural disasters cannot be prevented, but elevation data can provide valuable insights to support geologic investigations and effective enforcement of land use management regulations to reduce the impact on people, property and the economy.

Getting Started with 3DEP

The partnership in Idaho is an ideal model of how 3DEP can work to bring like-minded stakeholders together for projects covering complex, expansive geographic areas, and deliver data that can benefit them in numerous ways.

To attain 3DEP coverage coast-to-coast, partnerships must engage a variety of new and existing stakeholders, including the federal agencies that manage significant swaths of land across the West. And the investments must extend beyond those most highly populated areas already covered to support infrastructure and guard against natural hazards.

These efforts may be further incentivized by new Department of Interior partnerships under the 3DEP Executive Forum, new federal requirements, the Earth MRI critical minerals initiative, proposed national legislation relating to landslides and the formal establishment of a national 3DEP program by law, as well as other initiatives supported by groups in the West.

If you’re considering a LiDAR project, and are interested in creating a partnership to benefit from the matching 3DEP program funds, check out the BAA, which launched in early September, and plan to attend USGS webinars and in-state presentations for more information. 3DEP provides links to resources to connect you with potential partners seeking geospatial information in the same general area. Once a partnership is formed, you must develop a project plan and scope, and a cost-sharing model, to submit before the deadline, which is expected to be November 1.

Engaging a variety of new partners and an expanded vision of how elevation data can be used in more remote areas is key to ensuring 3DEP can win the West.

Podcast: Why should you take a closer look into Open Source GIS?
Increase Your Visibility and Deliver Results with Google Places
Dust Off Your Bookshelf and Escape with an Atlas
Leave the Building to Us
Maximize your GIS Workforce Productivity with the Cloud
Streamlining Your Mobile App Creation with Geocortex
Podcast: Census 2020 - What's next for GIS professionals?
Explore Using HD Aerial Imagery for Emergency Preparedness
How to Design your GIS for Today and Beyond
Three Predictions for the Geospatial Industry by 2025
IMAGINE Artificial Intelligence Improving Your Remote Sensing Projects
Geospatial Technology Takes on COVID-19, Geopolitics & the Roots of Conflict
Take a Tour: Exploring Geospatial Technology in Museums
COVID-19 News & Resources