A Pathway to Creativity and Dreams, Paved with Legos

Editor’s note: Thank you for joining us for this edition of GeoInspirations. Today our distinguished columnist, Dr. Joseph Kerski, features Samuel Mollema from Melbourne, Australia.

During the 2019 conference of the Geography Teachers’ Association of Victoria, in Melbourne, my colleague and I were operating an exhibit for Esri Australia. We soon noticed that there was another fascinating exhibitor there, not a company, nonprofit, or government agency, but an amazing one-man show named Samuel Mollema. His Lego model of Melbourne, painstakingly created at a specific scale piece-by-piece from thousands of Lego sets, so inspired me that I asked him if he would share his story on GeoInspirations. Here is a video I filmed of his work. In talking with him at the conference and thereafter, it is clear that not only his Lego model is inspiring, but his career journey and vision for the future makes him seem much wiser and older than his 19 years. It is my great pleasure to introduce Samuel Mollema to Directions Magazine readers and, through his story, inspire you to pursue weaving in design, performing and visual arts, and creativity into your own career pathway, and do something that nobody else has done.

I asked Samuel to describe his current position and background. He said, “G’day! I am a 19-year-old Lego architect and enthusiast, theatre and dance teacher, and a qualified Allied Health Assistant. After completing my courses in Allied Health at the Royal Melbourne Institute of Technology, I’m hoping to continue towards a bachelor’s in physical therapy. If not, I have a second preference in architectural building design. I’m an Aussie-born Melbournian, after my family moved from the Netherlands. My parents decided to home educate me from a young age, which has led me to discover my passion for Lego, geography, architecture and theatre in the free time it gave me.”

I asked Samuel whether there was a specific thing, or person, that inspired him to enter the fields he did. He said, “My parents pushed me to follow my interests and passion, giving me the freedom to learn without limits and at my own pace. This gave me the independence I needed to figure out which paths suited me best. I’ve been in theatre for 11 years and in that time the confidence in myself and my abilities grew. This enabled me to start putting myself out there with my work, and I have my theatrics teacher Jacqui to thank for that inspiration.”

I asked Samuel to share a person, class, or topic that has most inspired him during his journey. He said, “The fantastic people I’ve met through conventions, exhibitions, courses and classes have all allowed me to realize that things in life always have room for improvement. At age 12, I started with an online course in architecture, and discovered my love for city planning, design, and studying structures, their styles, and their paths to becoming reality. At the time, I was also given my first Lego architecture brand set — oh boy! That one set started a wildfire effect and I was building with Lego in my room every chance I got. Every other smidge of time I had I was in the city center, admiring Melbourne’s skyline and grid-like plan. At age 14, this gave me the idea to rebuild Melbourne in Lego! On the flip side, I was also a part of two theatre schools, developing my communication and confidence; at age 16 I was promoted to assistant teacher and began a scholarship, which I finished in 2019, and managed to gain the reins of the class as a teacher. Then I applied at RMIT [Royal Melbourne Institute of Technology] University for a Cert IV in allied health assistance at 17 and completed it in 2019. Though, of course, to be able to afford Lego parts and fees for this, I had many part-time jobs as a waiter, window cleaner and a landscaper.”

I wondered about the project or initiative that Samuel is most proud of being a part, and he said, “After four years of consistent commitment to the MelbourneScape project, a full replica of the CBD [Central Business District] of Melbourne in Lego, I’ve found myself proud of the achievement and success that the project has been. After many attempts to find the right scale and sizing, I came to 1:2200 scale, which translates to 1 kilometer = 45.45 centimeters; the project currently stands at 123 square centimeters (2.7 square kilometers in scale). Thereafter, I spent time scouting the city in real life to get an idea of the scale and color schemes. Then once I started at RMIT, I spent my lunch breaks checking the sights for insight on what I could improve in the project, and enabling myself to recreate each building with the best accuracy, redesigning older models and updating as new structures were built. There are currently over 20 structures under construction in Melbourne as of December 2019 — hard to keep up with!”

“When I couldn’t get to the city in person I used Google Earth, maps and a website called SkyscraperPage to gain the info I needed. And using BrickLink, a culmination of Lego stores from across the world, I’ve ordered in 300 kilograms worth (Joseph’s note: yes, kilograms! Amazing!) of individual pieces. I’ve shared MelbourneScape with the public at many events such as Brickvention, fundraiser exhibitions, and geographic conferences. The project is forever changing and I’m planning to expand further into the inner suburbs.”

I asked Samuel to advise us, the readers, what he thinks is the most important thing we need to work on as the education, GIS, and geography community. He said, “Individualism: every person has a different set of learning techniques, abilities and interests. One of my favorite quotes is from Albert Einstein: ‘If you judge a fish by its ability to climb a tree, it’ll live its whole life believing it is stupid.’ Many people have delved into this subject before me, but I still feel that the general education system is flawed in many ways, especially in terms of the treatment of every child as a number in larger schools. Some learn hands on, holding an actual map and compass in their hands, while others learn best on a theory-based delivery. The education system has stayed relatively the same in the past 100 years; this was one of the many reasons why our family chose homeschooling, since myself and my brothers all learned at different paces with different interests.”

“So, to those who are pursuing their dreams and passions, keep moving forwards and don’t let anyone hold you back, making you believe your ideas are ridiculous or impossible. With the right mindset, anything is possible! Lego, for me, is an escape from the hustle of the world; it lets me let my creativity loose, and through it, I’ve met some of the most amazing people! If you’re looking for a career in Lego or just wanting to display your work, I urge you to look around for a local Lego user group to join and apply for exhibitions. Put yourself out there and keep at it!”

What is Samuel’s favorite map?  “I’m always fascinated by old urban maps —it’s baffling how folks back then figured it out without the technology we have today — and comparing them with newer ones to see what’s changed.” 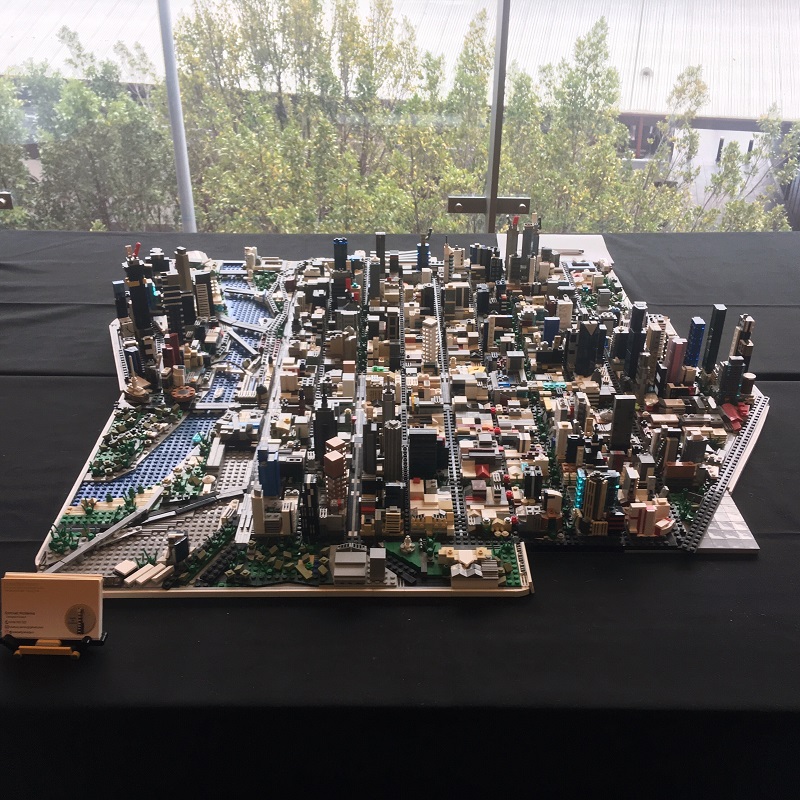 Top Geospatial Articles of 2020
Top Geospatial Webinars of 2020
Top Geospatial News of 2020
How much do you really know about the U.S. Census?
Modeling Disease & Behavior Using GIS
A Pathway to Creativity and Dreams, Paved with Legos
Ghost in the Machine – Exorcise Phantom Addresses with Delivery Point Validation
The Emergence of Geo-Enabled 360-Degree Aerial Imagery
Why Cartography Still Matters
Podcast: Community Mapping and Social Justice - A Conversation with Black Girls MAPP
GIS Jobs: Current Industry Expectations
Three Predictions for the Geospatial Industry by 2025
Podcast: Why should you take a closer look into Open Source GIS?