Looking up and looking down: What’s happening in the sky

Since October 4, 1957, when the Soviet Union launched Sputnik, the first artificial satellite, there have been nearly 6000 satellites launched into Earth’s orbit, as well as dozens of extraterrestrial probes exploring the far reaches of the solar system and beyond. I covered the latter in a previous article, so this month, we’ll explore what is happening above our home planet.

While there are no definitive answers as to how the Moon, Earth’s first and largest satellite, was formed, we have a pretty clear picture of the history and current status of human-made satellites.

Sputnik began the Space Race, a competition between the United States and the Soviet Union (presently Russia, Georgia, Ukraine, Moldova, Belarus, Armenia, Azerbaijan, Kazakhstan, Uzbekistan, Turkmenistan, Kyrgyzstan, and Tajikistan). It was one act in a much larger geopolitical play, the Cold War. The Soviets had not only launched the first human-made object into space, they had also launched the first organism, a dog named Laika—who never made it home—and, in 1961, sent the first man into space, Yuri Gagarin.

The U.S. was falling behind, so we upped the ante. During the cold war era from 1957 to 1991, the USA launched over a dozen satellite missions, including Vanguard 2 in 1959. At a mere 24 pounds, it was the first weather observation satellite. <https://nssdc.gsfc.nasa.gov/nmc/spacecraft/display.action?id=1959-001A> Although driven by geopolitics amid the threat of nuclear destruction, the cold war produced remarkable scientific advances in the exploration of near space and our solar system.

Today, satellites are deployed for many purposes. They help us communicate across the globe. They help us navigate across the sea and across the city, and they take pictures at many temporal, spatial and spectral scales that have seemingly limitless commercial applications. In this article, we’ll focus on the latter two missions: navigation via GNSS, and remote sensing.

At a presentation for a rural GIS group, I gave the short version of how GPS works and its evolution. A sweet old lady raised her hand and asked, “What’s to stop the government from cutting this off and making us pay for it?” I didn’t have a definitive answer. “Ma’am, I don’t know how policy works at that level.”

I offered what I did know: GPS has too much commercial value to be a commodity. From tourists to giant oil tankers and commercial airlines, so many people use this technology that charging for it would be a blow to our national economy. It’s a small investment for a great return.

The Global Positioning System, or GPS, has become ubiquitous in countless elements of our lives. When I’m driving in an unfamiliar city, my phone tells where to turn. The National Park Service and many other agencies rely on it for applications as diverse as archaeology, botany, law enforcement, firefighting, wildlife research, and coastline monitoring.

GPS was the first Global Navigation Satellite System, or GNSS, and from its inception in 1973 to full operational capacity in 1995, it was the only GNSS in the world for decades. Over the years, it went through several changes, including higher accuracy, the introduction of the WGS 84 geoid, and the end of selective availability.

Since GPS was initially developed as a military application, selective availability was a tool that intentionally introduced error into GPS signals except on military devices. On a civilian-grade GPS receiver, the error could be as high as 50 meters. During the Gulf War of 1991-1993, there weren’t enough military-grade GPS units for full deployment (Anyone remember the PLGRs?), and troops were using their own personal units, which were woefully inaccurate for combat use.

Therefore, SA was turned off, and along with giving troops much better positioning information, civilian use exploded. Though intended to be only a temporary discontinuation, the economic and recreational benefits of higher accuracy soon became apparent.

GPS isn’t the only GNSS system out there now. In 1993, Russia’s GLONASS system became fully operational with twelve satellites. Originally designed to operate only over Russia’s vast landmass, it is now available globally. Newer GNSS receivers can acquire both GPS and GLONASS, and from personal experience in rugged, steep backcountry, I can attest that having 36 signals instead of 24 makes a tremendous difference in not only accuracy but reception. I have to pause less often to regain a signal.

Similarly, having seen the benefits of GNSS, other nations have begun deploying their own systems. Like GLONASS, China’s Beidu and India’s NAVIC have initially launched as regional systems, but are certain to expand to a global scale. The European Union’s Galileo has been slower in development, due to both its global scale and multi-national funding, but has already had some deployment.

The full scope of these systems is far beyond the space we have in this piece, but Geospatial World has an excellent overview, including planned systems from Japan, as well as technical details for each of the systems, both deployed and planned.

It all started with Landsat. Or did it?

Systematic Earth observation began with the launch of NASA’s Landsat in 1972. Legendary for its consistency and endurance, the Landsat mission has been taking daily images of the Earth for decades, starting with Landsat 1 and now Landsat 9. These have been used for countless studies, especially for monitoring changes over time.

As more Earth-imaging satellites are deployed, the database of images is growing exponentially. One of the most recent developments is the Global Forest Watch site, a cooperative project between multiple agencies incorporating imagery from several satellites in various resolutions and many spectral bands, including radar that can see through clouds. This is used to detect illegal logging and mining in remote areas across the globe in near real-time.

Before Landsat, however, the astronauts piloting the Gemini and Apollo missions took hundreds of breathtaking photos from the windows of their capsules using only hand-held cameras, including the iconic “Earthrise” photo from Apollo 8. These photos illustrated the power of space-based imagery to visualize our planet as one place, one home upon which we all live.

It’s getting crowded up there.

There are nearly 6000 satellites in various orbits. Only about half of these are operational, as shown in a powerful infographic by the World Economic Forum. The rest are orbital debris, or “space junk,” of which there are over 500,000 pieces! Though most will burn out in the atmosphere long before reaching Earth, they pose a hazard to operational missions, including the International Space Station.

The U.S. Department of Defense maintains a dynamic database of anything “larger than a softball.” Clean-up efforts are underway, but of course, this means more satellites. Both the United Nations and academic institutions have developed programs regarding space law, but given the multi-national cooperation required, it is a challenging effort.

Satellites are powerful tools for many missions, whether for a trip to grocery store, tracking cargo, or predicting the climate change impacts on food supply across the globe, but they can only be effective if we know how to use them. As I mentioned in a previous article, irresponsible reliance on GPS can have disastrous consequences, and satellite imagery can paint many different pictures. 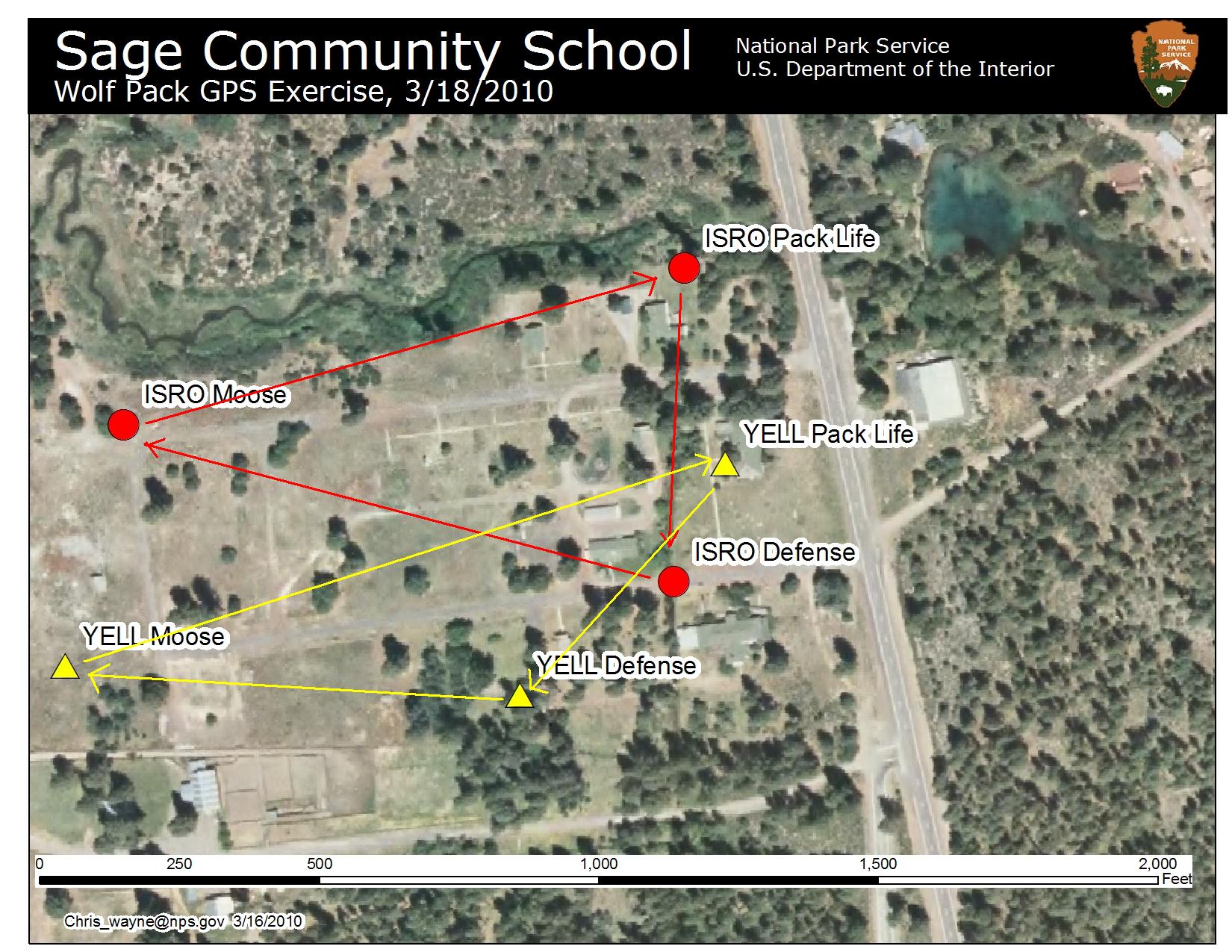 Earth images are incredibly engaging as educational tools. In higher education and professional training, we delve into the details of differential correction and spectral, spatial and temporal resolution, and propagation of error. Yet as complex as these topics are, they can be made accessible to almost any audience.

At one of the GeoTech workshops, I made a storymap called “Remote Sensing that my Mother could understand,” showing how wire mesh is like spatial resolution, and how different boxes of crayons (the four-pack or the 64-pack) represent spectral resolution.

Education and training are critical, whether in the classroom or the workplace. Esri is currently offering an Imagery and Remote Sensing Educators Summit, and there are many other resources out there for training in GPS and Earth observation/remote sensing. NASA has a wonderful collection of exercises that can be used in any classroom from kindergarten to graduate school, ranging from flipbooks to complex analysis.

In a similar vein, I taught GPS to third-graders by designing an exercise with the teachers in which the kids broke up into three “wolf packs,” each one representing a real pack from various national parks. They used waypoints on their Garmin units to navigate to various stations, at each of which they had to answer questions that would lead them to the next station—essentially an educational, geo-centric treasure hunt.

That was ten years ago, and many of those third-graders are now headed off to college. One young lady is an aspiring pilot and a whiz at math and mapping, but she knows that technology is only a tool, and no substitute for foundational knowledge. As she said when we did our post-activity debrief: “Real wolves don’t have GPS, so they have to use their noses!”

Hero Image by PIRO4D from Pixabay