Drones Helped Save Notre-Dame Cathedral: an interview with Beniot Guillot at Artedrones

At approximately 6:50 p.m. on Monday, April 15, 2019, the famed Notre-Dame Cathedral started burning. Approximately twelve hours later, 400 firefighters were able to extinguish the blaze. Videos from police drones were instrumental in identifying and directing firefighters to the location of roof hotspots and fire spread that could only be seen from the air.

Although the fire was out and the 850-year-old structure was still standing, the damage was extensive. Ground crews couldn’t enter the church to evaluate the destruction because it was too unstable. Once again, drones were the answer. Within twenty-four hours, Artedrones of Paris was contacted to provide data of both the inside and outside of the cathedral. The following is an interview I conducted with Benoit Guillot, coordinator for Artedrones and chief drone operator. He and other Artedrones employees spent hundreds of hours gathering and analyzing data of the Notre-Dame Cathedral after the fire.

BM: Perhaps we can start by giving our readers a little background information about your company and yourself.

BM: How did you become involved in the data collection and analysis of Notre-Dame data?

BG: The fire happened during Monday evening, as far as I remember, and we were contacted Tuesday evening. I received a call and a person ask[ed] me if we could do [volumetric 3D mapping]. I answered that we could provide 3D photomosaics, point clouds, digital elevation, and digital surface maps. He then asked if we could make a 3D model of a church that recently burned. I rapidly understood that he was talking about the Notre-Dame Cathedral that just burned. I explained that we could, but we would need to know the conditions and if it was safe to go inside. Several hours after, we had an official mission request by French authorities.

BG: Yes, the fire was out but we were told that the vault of the church was not stable. Based on this limited information, we were forced to plan our missions without knowing exactly what type of flying conditions we would encounter.

BM: How long was the mission planning stage before you started flying?

BG: We started flying the following Saturday, so the planning stage took about five days. We were concerned that our UAVs could be lost at any time because bricks and other debris were still falling from the roof, so we decided to deploy one drone per flight (not two or three [at] the same time). And we took a panoply of backup tools in case of crash or lost. 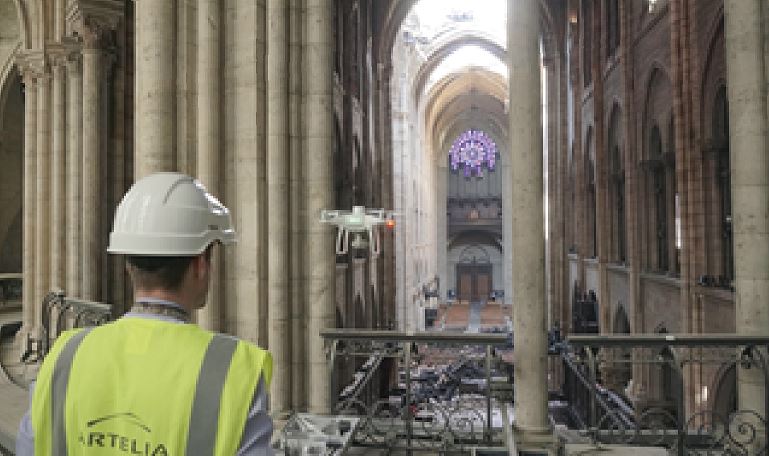 BM: In addition to falling debris, did you have any other flying issues?

BG: Yes, each flight was very complicated because we not only had the debris issue, but we also encounter[ed] strong wind turbulences inside the church. We had to turn off all anti-collision features because we needed to fly between the columns and in close proximity to the church walls. We changed the micro SD cards after each flight because data from the previous flight would be lost if the next flight [crashed].

BM: Considering the adverse flying conditions, did you ever lose a drone during the mission?

BG: No, we had some frightening moments because of the wind turbulence, but fortunately we did not lose any equipment. The drone was especially hard to control in the metallic structure of the scaffolding deployed for the church steeple renovation.

BM: How many people were in your team?

BG: We had a group of 20 people broken down into four teams. Including me, we had 14 people that flew the missions while other members changed batteries and SD cards. Each [day], there was a permanent [5-person] team to lead the mission.

BM: How many flights did you conduct and how much data did you acquire?

BG: We flew pretty much nonstop for six days. During this time, we conducted over 200 flights that gathered terabytes of data.

BM: What drones and cameras were you using and what type of data did they collect?

BG: We used three different drones. We used the Phantom 4 Pro RTK for mapping the cathedral outside and vertical surfaces; we used a DJI Matrice 210 for making the undersurfaces of the roof and the vaults; and we used a Mavic Pro Thermal Enterprise for making the hotspot detections.

BM: What type of images did you construct from the data that you collected?

BG: We built over 300 360° panoramas of both the inside and outside of the church. Each file was made up of 70 individual images stitched together. The work included both vertical and horizontal surfaces, and each file enabled viewers to see a continuous 360° panoram[ic] scene of different parts of the church.

We also gather[ed] stereographic data from which we could determine slope angles and take relief measurements.

So, we deliver[ed] with a Web GIS, a very fluid, easy-to-use platform. [We produced high resolution data that would give the clients the flexibility to manipulate and use the data as they need.] That's why we developed some tools to easily visualize dense cloud[s] in the sky.

BM: What were the tools you used to process the data?

BG: We used DJI Terra and Metashape from Agisoft to process the data, then we used various GIS applications like ArcGIS from Esri to analyse photomosaics, digital elevation and digital surface models. The GIS software also allowed us to create various image overlays. Once the job was finished, we transmitted the processed data via Web GIS to the French authorities.

BM: How long did the total operation take?

BG: As I stated earlier, we worked for six days pretty much nonstop gathering the data (flying) and then it took us three weeks to process the first batch of data. We did do a prerelease of the information a week after we stopped flying, but the final project wasn’t actually delivered until three months later.

BM: What are the French officials doing with your data now?

BG: Oh, I don't really know exactly what they are doing now because we are no longer part of the process. Based on TV and newspaper reports, it appears they are still researching the stability of the church and how to proceed with reconstruction. You still have a risk of the roof collapsing at certain points, so I believe they are preparing to reinforce the structure to avoid a collapse. If the roof were to fall, the buttresses on the outside of the church could push the cathedral walls in and the church would be a total loss.

BG: In the process of doing our jobs, whether it is bridge inspections or environmental studies, we all too frequently encounter negative feedback from the general public. Many people seem to think we are spying on them or that our drones might cause aircraft accidents. The simple fact is: benefits from using UAV technology far outweigh any perceived or unfounded negative issues people have about drones. The work we did on the Notre-Dame Cathedral would certainly support this fact.

Drone and drone data contributed significantly to the preservation of the Notre-Dame Cathedral in several ways. First, by directing firefighters to roof hot spots that could only be seen from the air and secondly, by producing tens of thousands of images inside and outside the church. These data not only helped to analyze structural issues, but they greatly reduced the need for workers to enter the building and conduct the slow, dangerous process of acquiring the same information.

Automated Tasking, Delivery Make Near Real-Time Imaging a Reality
Elevating Healthcare Using GIS Data
Podcast: Data Management and Language Considerations
Geography in Everyday Life in 2022: How geography is embedded in our everyday lives
Borders and Barriers: The Geography of Boundaries
Can GIS Save Your Wine Night?
Preparing Your Organization for a Move to the Cloud: 5 key considerations to assess your organization’s cloud readiness
Delightful Picture Books for Adventurous Kids That Teach Spatial Thinking and Mapping Skills
Map Puzzles for You and Your Young Mappers
What does it mean to be geospatially smart? Series
Improvements in Mapping Global Flood Hazard Benefit the GIS Community
Ever Wonder How the States Got Their Shapes?
Clean Energy is Looking to Geospatial Technology to Mitigate Environmental Risks
Preserving Law and Order with Maps and Data
Mural Cities: How GIS Adds Value to Local Culture
Data Science for GIS Professionals — 5 Tips to Make the Most of Your Skills
Melissa Acquires ZipInfo.com