The U.S. Constitution is one of the most brilliant documents ever written for the foundation of a democratic nation-state. As it says, it is “the supreme law of the land.” Its laws, and the laws established therefrom, apply to all Americans equally.

However, are laws always applied equally? There is no doubt that despite our highest ideals, injustice in social and environmental equality still exists in the U.S. and abroad. The definition of equality is subject to many interpretations, as is the concept of justice.

In addition to his GIS duties at the Oregon Department of Forestry, Emmor Nile is a GISCorps volunteer supporting the Tanzania Development Trust, which is a part of the Humanitarian OpenStreetMap Team. OpenStreetMap, as its name indicates, is an open-source platform for participatory mapping, specifically for creating an open global map, from aerial and satellite imagery, field surveys and ground GPS observations.

HOT is an international team with Working Groups who work on specific or multiple projects, including water and sanitation, gender equality, poverty elimination and disaster response, and numerous others. By providing accurate roads and building data for dozens of countries around the world, they increase the capacities of governments and NGOs to mitigate and, hopefully, prevent conditions detrimental to vulnerable populations.

The power of scalability

Like OSM, the Environmental Justice Atlas is focused at the global scale, sharing maps that document and catalogue social conflict around environmental issues and scales ranging from global to regional to local.  It is also open source, running on a custom application, and invites volunteers to participate in various projects, which include Corporate Human Rights Violations, Global Seed Laws and Mining Conflicts. It also offers maps in Spanish for easier access to the people who live in the affected areas. You can join the project as well.

The EJA and OSM are unique in many ways. Plenty of data is available at the global scale, such as the CIA World Factbook, and Esri’s basemaps and their Living Atlas of the World, which offer maps, both in web maps and images that can be georeferenced, along with tubular data at The World Factbook. However, most of the data is generally quite coarse in spatial scale.

In contrast, the EJA and OSM seek to create a dynamic database of the world with the scale of a local map. Given the volunteer participation and sweeping scale of the projects, the geographic coverage itself is widely scattered across the globe. When the data is created, however, it offers much more detail than has been previously available. Even roads digitized from a Landsat image with 15-30 meter resolution will offer more accuracy than much that exists now, especially in remote, undeveloped areas such as Africa or the Amazon.

Scalability in the U.S.

Many states and cities in the U.S. have gone to great effort to map social and environmental justice. In California, the Othering & Belonging Institute at UC Berkeley has created a state-wide “opportunity map” to help determine which census tracts in the state are best suited for the construction of low-income housing. This map was used by state decision-makers to allocate funds more equitably, based on empirical analysis and verifiable data.

In a similar vein, the State of Washington has used GST and other data to create a map showing environmental and health disparities for every one of the 1,458 census tracts in the state. The mapping tool itself allows visitors to make their own maps, but it requires a certain degree of map-savviness and patience to put all of the pieces together.

At the urban level, the Center for Earth Energy and Democracy in the Twin Cities of Minnesota recently released a mapping tool for mapping EJ. It also offers a story-map as an overview of the project, as well as an infographic that illustrates what these data and maps can reveal.

What about the rest of the world?

Fortunately, the U.S. has a robust geospatial infrastructure and a very talented community of geospatial professionals. Although data and skill sets vary widely across jurisdictions, we are among the global leaders in using GST to inform decision-making at levels from municipalities to states and to the nation itself.

In the developed world, technology, data and intellectual capacity are abundant. An academic study of Dortmund, Germany drills down to the neighborhood level using demographic data, such as income, and environmental data, including air quality. While the study focuses on only a single city, its methodology could be applied to many other cities and municipalities.

Washington, California, Minnesota and Germany are prosperous societies, despite disparities in environmental justice and living conditions. They all have the resources and social awareness to address these issues in places that matter to the people. But…who are the people? 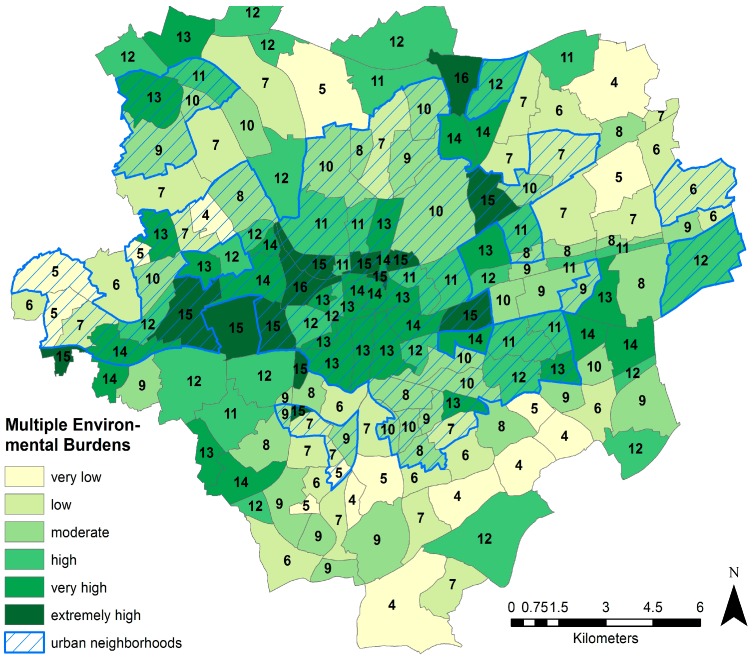 The previous examples have addressed various spatial scales, but the ones mentioned just above are all in urban areas, or developed by people in urban areas. Our world is becoming increasingly urban, but over 40% of the globe’s population still live in areas classified as rural.

In North Dakota, four Native American reservations used GST to preserve their voting rights in the face of a new, statewide voter identification law that required street addresses to obtain a voter ID. As in many tribal and other rural communities, people didn’t always have street addresses.

A collective project between academia, a tribal advocacy group and the tribes used various ArcGIS applications and OpenStreetMap to identify home locations and streets. This collaborative project, with stakeholders deeply involved, helped bring record voter turnout on three of the four reservations.

The example above illustrates several of the many challenges facing indigenous populations in the U.S. and across the globe: disenfranchisement, geographic and thus political remoteness, and the gap between traditional knowledge (we know where we live!) and modern land and environmental laws (where is the deed?).

In some cases, a digital GIS may not be available, but this doesn’t mean that traditional use areas can’t be mapped. The Toledo Maya in southern Belize produced a beautiful hand-drawn atlas of traditional use areas, the maps of which were converted to data and used in policy reports and policy decisions. Subsequently, a court decision recognized the legality of a communal land tenure system.

Another academic study from 2011, this time in the mountains of far northern California, addresses key issues in mapping tribal territories. While the full content is well beyond the scope of this article, Emma Tome looked at how GIS was used by three tribes (Karuk, Hoopa and Yurok) for resource management. She considered their technical GIS capacity as well as their approaches to integrating traditional knowledge and modern methodologies.

One of the takeaways from this study, and the examples above, is that cultural resources and natural resources are intertwined. Unlike many nations, the U.S. has laws that define “cultural use of the biophysical environment, and such ‘intangible’ sociocultural attributes as social cohesion, social institutions, lifeways, religious practices, and other cultural institutions.”

Taking the first step: Get involved!

As Americans, we are blessed to  live in an open society in which the people hold the power. But with great power comes great responsibility. As geographers, we hold a unique position of both power and responsibility.

Promoting environmental and social justice can be as simple as volunteering a few hours a week with HOT, or as involved as developing a youth program with AirBeam, such as the one deployed by the San Francisco Bay Area parks partnering with state, local and nonprofit groups.

As we’ve seen, GST can be applied to scales from global to local, and from perspectives that range from community organizers to academic studies. The world is a vast place. It may seem a daunting task to map every street and building in Tanzania or to geocode every residence on the sweeping plains of North Dakota, but to quote the good Rev. Dr. Martin Luther King: “All labor that uplifts humanity has dignity and importance and should be undertaken with painstaking excellence.” Or perhaps more succinctly: “You don't have to see the whole staircase, just take the first step.”