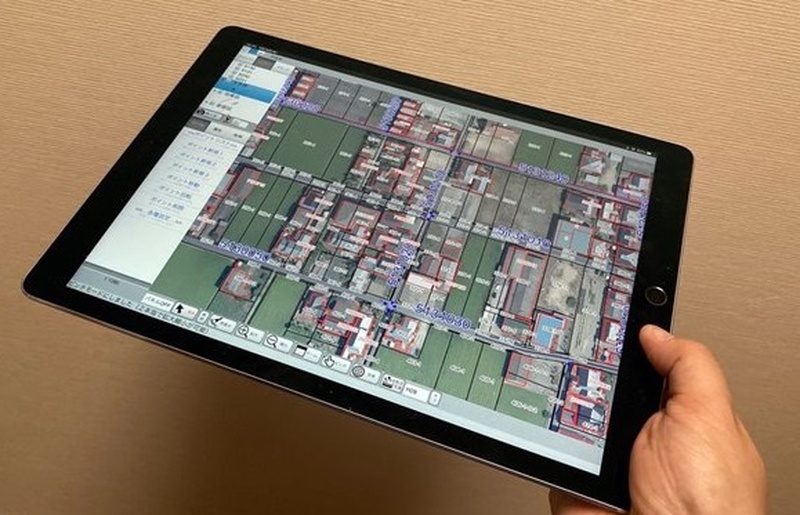 Unlike web applications, Mobile Matilda can operate in a local (off-line) environment because map layers and data are read from the iPad memory. Users can update records in the field for later synchronization to the desktop or server via a secure Wi-Fi or GSM connection, when available. TatukGIS development tools enable efficient storage of even huge GIS datasets as SQLite database layers on iOS and Android devices.

A mobile map project can also incorporate information streamed via the web, such as TatukGIS hosted OpenStreetMap web tiles as a background layer.

Field surveys conducted by the Tamba government often involve assets such as vacant houses and solar power generation facilities. In recent years, unoccupied houses left unmanaged have become a major issue for the prevention of crime and disasters, requiring municipal governments to better understand and manage this problem. Investments in solar power facilities must be verified and inventoried to qualify for government financial subsidies.

In the past, field surveys required personnel to carry a camera, a map, and paper-based inventory records into the field to collect information, and then return to the office to associate newly collected data with already existing information. The process was labor intensive and prone to errors. The resulting data was not always usable in an efficient manner. With the Mobile Matilda application, observed survey information, photographs, and map figures are electronically associated to the map while on site. For improved workflow, survey assignments can be set up in advance to enable the field researcher to access relevant records simply by tapping and selecting on the tablet computer. The iPad’s GPS information can be used to easily center the map (or aerial photography layer) to the user's present position.

A user can enter new vector points which can be edited such as to change its position, add attribute information, or specify a direction (e.g., viewing angle). Photos can be added using the iPad's built-in camera or a linked 360-degree panoramic camera (such as seen at: https://theta360.com/en/).

Learn more about the Tsukasa Consulting and its Mobile Matilda application at: https://www.tsukasa-consulting.net